Hang’n With The In Crowd

After meeting Travis Hardy at The Urban Workshop (we were both working on our van projects) I decided to check out what he and his wife Lauren have been doing crisscrossing the USA for the past three + years with their Airstream trailer based Small Room Collective Road Emporium pop-up shop. Travis mentioned they were doing a three day pop-up at a small dirt town outside Joshua Tree CA in-between the Coachella concert weekends. An old western movie set town, desert scenery, exploring, artisan food, Oregon wine, and music were enough boxes checked to get me rolling to see what the pop-up shop experience is all about.

Pioneertown California is an old ’40’s movie set where actors like Roy Rogers and Gene Autry filmed. It’s a weird, quiet, almost forgotten kind of place. The most famous surviving business is Pappy & Harriet’s Pioneertown Palace, a bar and concert venue. Now the recently renovated Pioneertown Motel whose Grand re-Opening was the reason for the pop-up soiree is a second reason to venture onto the dirt. The hotel’s new owners, much like the two New Yorkers who bought P&H’s 13 years ago, thought if they build it they will come… and they do… and they did. Even the New York Times sent a writer and photographer.

After my gas station almost model wannabe experience (see FB) I wasn’t sure what to expect of the Coachella crowd in a dirt road town. A neighboring dirt lot starting filling up near sundown. At $10 bucks a person you could park for the show and stay the night in whatever sleeping arrangement you favored. Finely dressed millennials with straight white teeth and tanned skin unloaded just purchased Walmart tents from their BMW’s. Tent instructions blew away in the wind. Some realized they need a hammer to pound stakes in the hard desert dirt. Neighbors lent supplies. Cocktail recipes were tested and traded. By the second song the lot was empty as everyone headed to the show 300 feet away.

I fell asleep on a full moon April night to the just-from-Coachella sounds of Swedish band Miike Snow.

Pioneertown. Who knew! I’ll be Back 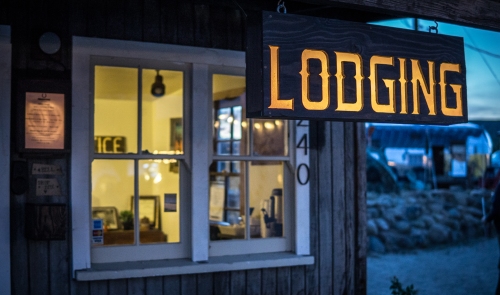 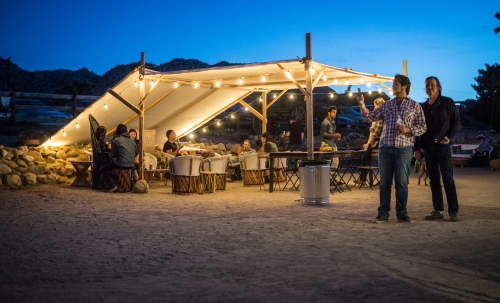 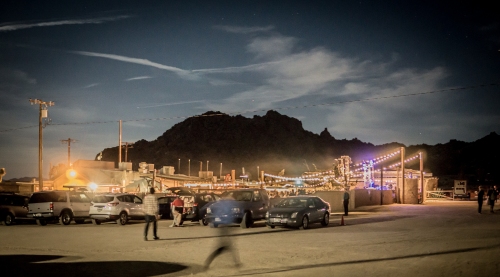