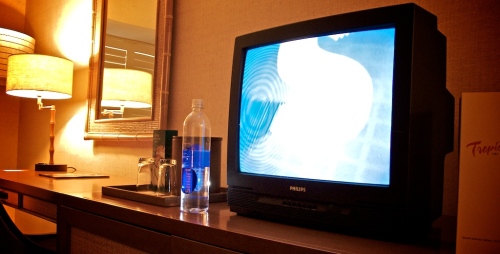 I’m in the city of Lost Wages, for more than a week for four different conferences.  I chose the hotel I’m staying in because two of the programs I’m attending are located here (and there was a great group room rate!)

For six days while here I’m in a course to learn everything possible about the most complicated capable motion image camera that is currently available. We’re diving into menus and systems and theory and post-production paths that only the manufacture of such a device can impart.

I’m in Las Vegas.  Perhaps one of the most “connected” cities in the world.  With the gaming industry and security concerns I’m sure the electronic watchdogs are tracking my every move, every minute.  There is an LED sign larger than an office building outside that changes colors and intensity in a dazzling glow on my hotel room ceiling 24 hours a day.  My hotel room is larger than the living room at my house.  There is a palm tree in my room.  The bathroom by itself is larger than the entire RV I just spent the last three months living in.  Everything in excess…  (almost!)

Next week up the street at the National Association of Broadcasters convention the buzz is going to be about 3D…  how as production professionals we’ll be left behind if we are not producing in 3D (presumably because the viewing public is going to demand it…).

But check out the state-of-the-art television in my room.  It’s a big 20″ tube. Heck, it won’t even tune in the current digital signal broadcast by stations now. It is barely larger than the room service menu.  It was made in 1995…

Somehow I wonder if this 3D thing is really going to take off….   maybe we should finish HD first…